Buying Comic Books for Investment – What to Look For

When I started collecting comic books back in 1984, I wasn’t interested in what the comics I purchased would one day be worth.  The stories and the art work is what drew me into that world.  Now don’t get me wrong, there were comic books, even back in 1984, that were worth far more than the $ .75 cover price.  In fact, I remember scrounging  all of my pennies together to purchase Amazing Spider-Man 129 for $60. Nowadays, Comic Books for Investment really is part hobby and part investment and many enthusiasts are often shocked to find out how much some of their comic books are worth.  In the following segment I am going to focus on the investment side of comic book collecting and answer some frequently asked questions pertaining to purchasing comic books for this reason.

Which comic books are best to buy for investment?

Newly published comic books will likely never garner the sort of return that golden age and silver age comics are now seeing.  When looking for comics to buy, it is a safe bet that issues featuring the first appearances of key characters from the golden and silver age is the way to go.  Comic books like Detective Comics 27 (1939, first Batman) and Amazing Fantasy 15 (1962, first Spider-Man) are two hot books that have consistently climbed in value over the years – so much so that even low grade copies are out of reach to the average collector.

Bronze age key books in especially high grade have also now begun to climb significantly in value.  No doubt, Hollywood’s involvement in the industry has helped bring these third tier characters to the forefront.  And, since their golden and silver age counterparts are unattainable to most, many have set their sights on these.  9.8 copies of such comic books as Ms. Marvel 1 (1977) and Nova 1 (1976) have started to sell for thousands of dollars online.

Some modern books do increase in value, but will likely never be as valuable as their predecessors.  The Walking Dead 1 (2003)  and New Mutants 98 (1991) are great examples of modern age books that bring in over $1000 in high grade.

With Hollywood announcing new TV shows and movies projects on a regular basis, many investors are hording the first appearances of many characters that are not “hip” at the moment, but might be in the near future.   Think Guardians of the Galaxy and Suicide Squad.

Which comic books hold their value?

As mentioned above, first appearances and important story arcs will tend to hold their value and should be considered when buying comic books for investment.  That being said, a spike in value has been the norm as of late when a new film/TV project is announced.  For example, when Dr. Strange was recently green lighted to begin production in 2015, Strange Tales 110, the good doctor’s first appearance, increased in value as buyers/investors  began snatching up as many copies as possible.  Once the initial hype settles, prices drop slightly and will begin to increase steadily until the film hits theatres.  After a film’s release and once the dust settles, prices usually drop yet again and then plateau.  However, the comic book’s value usually remains greater than what it was prior to the all of the attention.  Tales of Suspense 39 (1963), the first appearance of Iron Man is a great example of this.  Also, how well a film/ TV project does can also be a determining factor in the value of its source material. 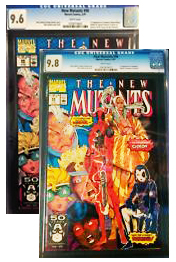 The condition/ grade of a comic book is an extremely important factor to consider when buying comic books for investment.

How do you  inspect a comic book for damage/ defects?

I could write several articles about the many defects associated with comic books, but instead I will discuss the best way to spot problems before you buy.   And although many believe that damage to comic books only happens when in hand, the truth of the matter is that many defects originate at the print house.  The following is a list of defects that were found on new comic books back in the old days – although some of these could still take place today!

Cover Overhang: When the cover of a comic book is unusually larger than its interior pages.

Off Centre Stapling / Missing Staples: Staples are not in the correct spot or are missing entirely.

Off Centre Printing: When the printed image isn’t correctly positioned on the page, or part of the intended print area is missing.

Distributor Ink Smear: Color brushed or sprayed on the edges of comic book stacks by the distributor/wholesaler way back when.  Various colours were used including red, orange, yellow, green, blue, and purple. Excessive smears with a good amount on the cover is considered a defect.

Upside Down Pages/ Cover:  Although a defect, these are sometimes sought after by certain collectors.

Misprinted Pages: Pages assembled or printed in the wrong order.

Missing Colour(s):  The sharpness and clarity of an image is evident when a print colour is missing.

Printing Creases: Very fine creasing which runs vertically from top to bottom of the cover.

These are but a few of the defects that befell a comic book at the print house in the old days.  And while these errors happen less frequently today,  some can still occur.

Does restoring a comic book affect its appeal and value?

Yes it does!  But, with the advent of third party grading, the risks involved in buying pricey back issues have virtually vanished as restoration is stringently monitored. Collectors, even the most novice ones, can see exactly what they are buying and compare asking prices with  online auctions and websites like GP Analysis for CGC comics. If, however, you prefer to purchase your comic books raw, do beware!  I cannot tell you how many times I have purchased a raw book thinking it was all original, only to find out later it had been restored.  The following is a list of common restoration practices and  how they can be detected.

Colour Touch:  Perhaps the most common restorative practice, whereby markers are used to “touch up” areas of the cover that have been scuffed. Unscrupulous sellers use this method to make their books look better, without telling the buyer.  Unfortunately, even the most minor colour touch will garner a restored grade by third party graders, thus reducing the books value significantly.

Remove the comic from its bag and angle the cover towards the light.   The marker’s ink will often appear shinier than the original inks on the comic.  A black light can also illuminate color touches.

Comic Book Repair: When a tear, loose staple or centerfold has been mended without changing or adding to the original finish of the book. Repair may involve tape, glue or nylon gossamer.

Cut Coupon:  Often times collectors are enamored with the cover of a comic book and judge its condition based solely on it.   It is imperative that a comic book be taken out of its protective bag and inspected thoroughly.  Golden, silver, bronze and even early modern age comic books were littered with ads that encouraged that pages or pieces be cut out.   Don’t judge a comic book by its cover – it may cost you dearly.

Open the darn comic book up and flip through the pages.

Adding missing paper, tear seals, stain/ink/dirt or tape removal:  All of these practices are considered restoration. The book may look better once the work has been done, but a restored book can never be worth the same as an non-restored book in the same condition.

Many of the above restorative practices can be seen by shining a light through the pages/ cover of the comic book.  Light will tell a lot.  Faint outlines of the work, uneven paper texture, differing page colour (even in the slightest) may be a sign of restoration.  A handy black light can also pinpoint where restorative work has been done.

Trimming: Cutting uneven/chipped edges of a book’s pages and/or covers to even them up.

Difficult to spot,  but try this: “… If you press the book flat on a hard smooth surface and look along the edge, if the edges are all even the book HAS been trimmed. If you still think the book is trimmed after it passes this test then open the book up to the centerfold. Try very gently pressing it flat and see if there are signs of cutting (lighter edge colors, slight roughness, differences in overall color)”  Taken from Collector’s Society Forum, User: PovertyRow

As with any purchase, if it seems to good to be true, then it probably is.  If you have any doubt what so ever, just walk away if.  You will find another copy another time.

Can any comic book be restored?

Some restorers will not work on severely damaged comic books. That being said,  spines can be strengthened, and missing colour and/ or pieces added.    Most professional restorers can let you know rather quickly if the restoration is worth it or not.  Please be advised that a restored book will never be as valuable as its non-restored counter-part; and many collectors will never buy a  book that has had restoration work done.

What is comic book pressing?  Is this considered restoration?

Pressing is the application of even heat and pressure in order to  attempt the removal of imperfections in comic books.  A collector will have his/her comics pressed to try and improve the overall appearance of the comic, and in doing so,  its value.  Good news: third party grading services like CGC do not consider pressing (when done correctly) restoration.

What is dry cleaning?

Dry cleaning is a process used to remove dirt and pencil marks from both the interior and cover a comic book, particularly in the white areas of the comic.  Dry cleaning means just that: no liquids (including water, peroxides and/or solvents) are introduced to the comic book during cleaning.  Instead, gentle dry methods are used to remove as much dirt deposits from the book as possible.   Dry cleaning will not remove tanning, stains, pen or marker, sun shadows or foxing.  Like pressing, if done correctly, dry cleaning is NOT considered restoration.

Where can you get a comic book pressed and cleaned?

The Comic Doctor has pressed and cleaned hundreds of comics.  Simply visit their web-site or give them a call for more information.