The Marvel machine will be releasing their Daredevil Series on Netflix 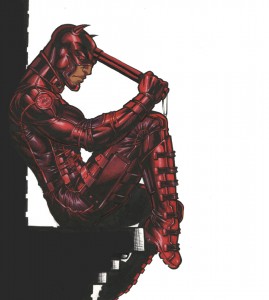 I always thought that comic book shows would be most successful on such stations as HBO, AMC and now Netflix.  If the Walking Dead is any indication as to how well shows based on comic books can do…Daredevil certainly has a shot.  While Marvel’s foray into television has been somewhat lack lustre so far with Agents of Shield,  it has churned out hit after hit on the big screen, here’s hoping that this series follows in the footsteps of its silver screen predecessors.

Daredevil’s first stint outside the pages of his comic book was in the third season of the animated series Spider-Man and his Amazing Friends in 1983 (one of my favs as a kid).  In the episode, Murdock appears primarily as himself, and only dons his Daredevil costume in a flashback.

Daredevil is seen next in the popular NBC live-action series, the Incredible Hulk, starring Bill Bixby as Bruce Banner and Lou Ferigno as the Hulk.  This production was the second of three made-for-TV movies that aired six years following the cancellation of the weekly show in 1982. In The Trial of the Incredible Hulk (1989), Matt Murdock, played by Rex Smith, tries to help prove David Banner’s innocence when he is arrested.  The biggest complaint from fans in this interpretation  of the man without fear is his costume; gone is the iconic red costume with horned mask, and in its place is a drab ninja-style black get up.

Daredevil is next seen in two more animated series.  First he assists the Fantastic Four against Dr. Doom in the 1994 series, the Fantastic Four and in 1996 he appears in two episodes of Spider-Man: the Animated Series, defending Peter Parker when he is framed for industrial espionage by the Kingpin.

Daredevil on the Big Screen

Daredevil pops up in a cameo during a chase scene in Jay and Silent Bob Strike Back (2001) and finally in 2003, Daredevil is granted his very own feature film starring Ben Affleck in the title role.  Unfortunately, critics and fans alike were really quite unimpressed with the film.  Perhaps the terrible casting choices for the Kingpin and Bullseye had something to do with it.  I personally hated that Bullseye had an actual bullseye on his forehead and that the Kingpin left red roses behind at crime scenes.  The creative team behind this debacle made some very bad choices.

Daredevil has the potential of becoming another one of Marvel’s super elite.  Hopefully the studio learned from the missteps of their 2003 attempt and will stay as true as possible to the source material.  If second tier characters like Iron Man and Thor can garner such acclaim and attention, why can’t Daredevil?  After all, he is one of Marvel’s coolest.  When rumours of Michael C. Hall being cast as Murdock began to spread across the internet, I was very excited as I had admired Hall’s work on Six Feet Under and Dexter. Perhaps he was a little too old for the part, but who cares?  The man looks like a  Matt Murdock and hell, he can act!  When it was announced that actor Charlie Cox, a relative unknown, was cast in the role, I began to worry.  I liked Cox’s work on Boardwalk Empire, but does this guy have what it takes to propel Daredevil to the next level?  To be honest, I would have preferred a more seasoned and well known actor to give it a go.  Then early last week, a production still surfaced showing Daredevil outfitted in black ninja-style costume – ala Rex Smith 1989.  Now my worrying became terror.  I tell myself, “Hey,  Daredevil wore a similar outfit in the Frank Miller/ John Romita Jr. mini-series, Daredevil: The Man Without Fear back in ’93”, but I am still terrified.   I am, however, certain that my fears will eventually subside – especially as the series debut draws closer.  Because in the end, like all fans, I just want the creative powers that be to finally do Daredevil right.