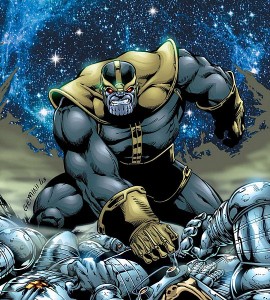 Since his first cameo following the credits in the first Avengers feature film, Thanos’ popularity has increased significantly. The brain-child of writer/artist Jim Starlin, Thanos has certainly come a long way since his first appearance in Iron Man #55. On a side note, creator Jim Starlin has often stated that Jack “the king” Kirby’s Darkside was the inspiration for his own celestial villain. This post will outline many of this beefy villains key appearances, just in case you want to pick up some of these issues and brush up on your Thanos lore, as he gears up to be the main antagonist in more than one Marvel movie.

How Thanos Was Introduced by Marvel

Thanos’ first tryst with the Marvel universe extended over five titles, including the Iron Man comic book mentioned above. The plot line would then pit Thanos against Captain Marvel (which was a bi-monthly series) in issue #s 25-33 of C.M’s self titled comic book (1973-1974). Following/ during this, Thanos then appeared in Marvel Feature #12 (1973), Daredevil #107 (1974) and finally Avengers #125 (1974).

The Infinity Gauntlet cemented Thanos as a Marvel Universe heavy hitter, and he has appeared consistently in a plethora of titles, including his own, since then. And as the Marvell cinematic universe continues to give audiences tiny glimpses of this dastardly bad boy (most recently in Guardians of the Galaxy, 2014), his popularity will continue to grow as fans can only speculate how Thanos will be depicted in the upcoming films.