In the event that you’ve been hiding under a rock, the Marvel machine and Sony have finally agreed to work on Spider-Man movies together. This brings web head back home and means he can now be seen in future Marvel Cinematic Universe (MCU) movies like “The Avengers” and “Guardians of the Galaxy” – and that MCU characters could possibly now show up in Spider-Man flicks as well. This is the most exciting comic book news story of the year thus far, even more awesome than Marvel’s Phase Three plans which were revealed a couple of months back.  Sony and Marvel’s arrangement will most certainly change superhero motion pictures from here on out. 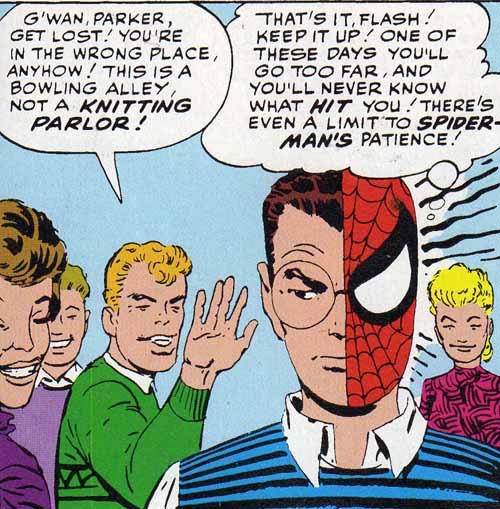 Peter Parker is a normal kid who has to figure out how to be a super-hero.

Spider-Man in the MCU offers a viewpoint that hasn’t been explored yet in the MCU. One of the reasons Spider-Man is such a hit as a comic book character is due to the fact that Peter Parker dealt with genuine issues, he wasn’t simply a superhero.  None of the current film heroes are normal in any way: Tony Stark manages a billion dollar business while thwarting baddies as Shell Head, Cap is the archetypical all American hero “re-born” to protect the free world and Thor is a god. Peter Parker, on the other hand, is still in high school for crying out loud, which allows for a very different kind of narrative that is lacking in Marvel’s current films.

The agreement between Sony and Marvel hasn’t been completely revealed as of yet, so it is unclear if just Spider-Man will show up in the Avengers films or is Kevin Feige (Marvel Studios President)  permitted to include other members of Spider-Man’s entourage like Norman Osborn, Venom, or Electro into other Marvel pictures? I’m hoping that character swapping will be permitted and that the arrangement will be straight forward allowing for as much character cross-over as possible!

Kevin Feige, Marvel Studios President will surely have a say as to how Spidey will be used in all upcoming films.

Marvel’s foray into television, especially the upcoming Defenders shows on Netflix, could benefit greatly from this new arrangement as well. The upcoming Daredevil and Jessica Drew series could be provided with an additional layer of story and characters, creating a universe we are all accustomed to in the comic books. There’s no indication that the Netflix shows require much help in securing a strong following, but including Spider-Man into the mix would most certainly help attract an even bigger audience. I’m not expecting Spider-Man to swing past Luke Cage or grab a burger with Daredevil, but the odd easter-egg will keep fans happy.

Not long ago, many believed that Sony would never sit down at the table with Marvel and pen a deal such as this. Luckily, Marvel Studio’s track record has been pretty good as of late…so good it seems that Sony couldn’t help but take notice, realizing that more money will be made with Spider-Man involved in the MCU. Lets hope that Fox feels the same way and joins in the fun with the X-Men and Fantastic Four.

Spider-Man and Captain America sharing the screen! Who would have thought this Marvel Team-up would actually take place in our lifetime? And not only that…Monster studios joining forces to bring fans what they have been asking for! Could it be they are finally listening and will continue to create movies that true comic book fans want to see, and not rubbish like X-Men Origins: Wolverine – Only time will tell.   And while we are all drunk with this good news, keep in mind Sony did state in its first press release that: “it [Sony Pictures] will continue to finance, distribute, own and have final creative control of the Spider-Man films.”  So there is still plenty of room for mistakes!  If Sony is smart, it will just get out of the way and let Marvel Studios do its thing…what Marvel has created seems to be working!